The comments come a day after Airtel said it will work towards releasing the points of interconnect or PoIs "well ahead" of the contractual obligation.

In a statement, Reliance Jio Infocomm Ltd (RJIL) welcomed the decision, but said "the quantum of POIs proposed to be released by Airtel is substantially less than the requirement estimated based on transparent workings shared with Airtel."
"Based on the current traffic flow between the two networks, the proposed augmentation by Airtel would still only suffice for less than one-fourth of the required interconnection capacity," it added.

RJIL said it has been consistently highlighting the urgency of the requirement and impact on Quality of Service.

"More than two crore calls are failing everyday between the two networks, which is far in excess of QoS parameters and of alarming proportions," it said.

Stating that urgent steps are required to be taken in the interest of customers of both operators, the company said it was "unfortunate that TRAI's intervention was required for Airtel to resume augmentation of POIs, which it ought to have done by itself in compliance with its license terms."

It said TRAI regulation does not provide for 90 days to adhere to QOS parameters. "TRAI in fact instructed the incumbent operators to urgently provide requisite interconnection capacities to maintain QoS parameters and not to make this subject to any contingencies or restrictions."

Yesterday, Bharti Airtel had said that it has received payment from the new entrant Jio for additional points of interconnect.

It said while interconnect agreement provides for a commissioning period of 90 days, the company will work towards releasing the PoIs "well ahead" of the contractual obligation and would ensure there are no capacity constraints from its end.

RJIL said Airtel has also insisted on certain unilateral deviations from the interconnection agreement between the parties with respect to installation of one-way E1s as against both-way E1s.

One-way E1s are typically installed between similar sized networks. "It is apparent that Airtel continues to abuse its market dominance by imposing onerous conditions which will imminently hinder RJIL's ability to efficiently utilise the additional E1s," it said.

"It appears that the QoS will continue to suffer and Indian customers will be denied the benefits of superior and free voice services as a result of such anti-competitive behaviour."

Despite this, RJIL said it will continue to work with Airtel and all the other incumbent operators to resolve this issue at the earliest and ensure that Indian customers get best-in-class services.

"Furthermore, Airtel has also been blocking the mobile number portability (MNP) facility for its subscribers who wish to subscribe to Jio services on baseless and unsubstantiated grounds," the statement alleged.

This, it said, is another example of disregard of license terms and its obligations under the Telecommunication Mobile Number Portability Regulations, 2009 and TRAI directions.

"This is again an anti-competitive move aimed at stifling a new operator, denying the Indian customers the benefit of choice of service provider. This is against public interest and fair play," it said.

RJIL hopes that Airtel would enhance the PoI's sufficiently to meet its licence obligation of QoS with immediate effect and maintain these parameters on an ongoing basis.

"Airtel must also immediately make available MNP to all its subscribers opting to port to RJIL in accordance with the license terms and MNP regulations," the statement added.​ 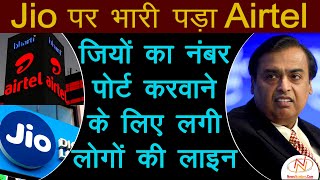