New Delhi: An unidentified person on Monday threw ink at Delhi Deputy Chief Minister Manish Sisodia, who returned to the city from Finland on Sunday.

The incident took place outside Lieutenant Governor Najeeb Jung's house when Sisodia was addressing the media.

When Sisodia was about to get into his car after talking to media persons, Brijesh Shukla threw ink at Sisodia which splattered across his arms and on a portion of his forehead.

Sisodia said the ink attack on him was a reflection of the "dirty politics of Congress and BJP".

Shukla, a resident of northeast Delhi's Karawal Nagar, has been detained by police.

He said he was angry with the Deputy Chief Minister for visiting Finland at a time when the city was grappling with rising cases of chikungunya and dengue.

Reacting to the attack, Sisodia said, "The Delhi government is committed to working on health and education. But Congress and BJP are working on ink. They have nothing to do with Delhiites. Their aim is to stop our initiatives. This is the dirty politics of BJP and Congress."

He also challenged the BJP-ruled civic bodies to clear the "filth across the city" and hit out at Congress for "ruining" the city's education and health sector during its term.

"This is merely a diversionary tactic adopted by them since we are focusing on development," he said.

The Aam Aadmi Party has been facing criticism from all the opposition parties as most of its ministers were out of the city at the time of the outbreak of chikungunya and dengue in Delhi.

Lt Governor Najeeb Jung had on September 16 asked Sisodia to cut short his trip to Finland and immediately return to Delhi.

However, Sisodia returned to the city from Finland yesterday as scheduled.
Sisodia, who also hold the education portfolio, had flown to Finland on September 12 along with his officers, to study the education system of that country.

Another contender for Lok Sabha seat, why Chandigarh has become a tender spot for Congress leaders? (NewsNumber Exclusive)

Another contender from Punjab Congress Savita Sisodia has expressed her desire to get party’s ticket. ...

Party will be strengthened with Khaira’s exit, claim AAP leaders

While the exit of Aam Aadmi party rebel leader Sukhpal Singh Khaira has left the party in shambles, the AAP leaders have continued to accuse Khaira of playing the opportunist politics. Meanwhile, many of them have expressed happiness over Khaira’s exit and claimed that party will be strengthened with his exit. ... 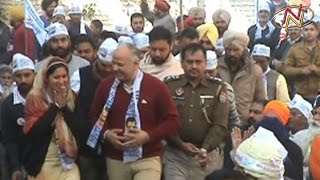