The first question most people ask this man is: “Is it a photograph or is it a painting?” Meet Mr. Gurpreet Singh, an art teacher by profession at St. Joseph’s Convent School, Bathinda and a true blessed genius. Born to S. Gurmeet Singh, he has made paintings that have left scores of people appalled, amazed and astounded. Art and creativity came early to Gurpreet. His mother recalls he started drawing line figures even before he learned the alphabet.

When kids of his age were figuring out what career to choose; Singh was designing toys for a company which made him self reliant. As most kids can relate, of being made to sing a song or a couplet by their parents for guests; Gurpreet was called over by guests to make their portrait! Fondly called as ‘Painter Babu’ by teachers and classmates, Gurpreet Singh received little or no formal training in the field of art. Even more interestingly, the artist’s family doesn’t have any previous association to art or paintings.

Singh did his schooling from Guru Nanak Public School and Des Raj School in Bathinda. What actually made him realize his affinity towards painting was the diploma in instrumentation engineering, he did upon his father’s advice. During the course, he started painting along with his engineering drawings. To finally answer his calling, he pursued a Bachelor in Arts from Guru Nanak Dev University, Amritsar and his Masters in Fine Arts from the same university. Then, there was no looking back for him. His talent was spotted by St. Joseph’s Convent School, Bathinda and he started working as an art teacher there. Kids and pass out students from the school often narrate their experiences in class, where he enthralled them with his paintings. A student recalls “What started off as a simple stroke of the paint brush would eventually be the portrait of a student in class!”

Every person has a story to tell. It was these stories that formed Gurpreet’s major chunk of the artwork. Capturing the love, pain and the euphoria in a person’s face has so far been his main area of interest. Modern art, which symbolized a change in the traditional form of art, has also been in his realm. Sometimes loosely referred to by some people as ‘absurd’ or ‘un-understandable’, this art form flourished since the 1860’s and has been the brainchild of artists like Vincent van Gogh and Paul Cézanne. Commenting on modern art he says “Modern art is drawn as an artist feels. It should be felt and treated as it is. People often try to find a story in it, but if we try not to; it is better.” Some artists find his artwork to be too varied, and sometimes which has hints and traces of pessimism.

He believes that art of a country is a mirror to its social, political, economic and most importantly the ‘happiness’ index. And sadly, as the happiness quotient of our country is in the doldrums; his paintings portray the general emotion of its people and the forces he thinks which are responsible for it. “I paint what I feel, and what is true.” On the lines of history, modern art and the current social problems; Gurpeet has painted marvels which have been nationally and internationally acclaimed.

One such painting ‘Satta’ (Politics) as he names it; has won him the appreciation of many people around the globe. The painting which pictures a Punjabi politician standing on the dais, with a farmer resembling a dried up tree hopelessly clinging to his back. The politician is shown addressing a large gathering; which he elaborates are just mute spectators who are forcibly bought to listen to his speech. Further, the sky is shown rumbling with thunder which according to him shows the wrath of the government on its people. Around the feet of the farmer, is dried up land with saplings sprouting from it, which depicts that there is still hope and the farmer will bounce back to glory.

Another marvel, which has won him accolades from the Canadian government is Justin Trudeau’s painting. The newly elected Prime Minister is depicted smiling, in a traditional ‘bhangra’ dress and that too with a ‘turle wali pagg’! The artist explains the reason for painting Trudeau is because of the utmost respect he holds for the PM. He also did it for the love and respect Trudeau has shown to the Punjabi diaspora by appointing a notable number of Punjabis in his cabinet. He further adds “Trudeau has been one those few Prime Ministers in the world, who has an equal ratio of men and women in his cabinet.” He wishes to present the painting personally to Mr. Trudeau and has been affirmed by the office of Harjeet Sajjan for his motive.

A culmination of modern art, research and the Indian freedom struggle is ‘Bhagat Singh’s’ painting which adorns the mantelpiece of Gurpreet’s home. Unlike the paintings available in the market, which have depicted the hero twirling his moustache, holding a gun or holding the tricolor; his painting tells a completely different story. He has drawn Bhagat Singh with Maxim Gorky’s famous novel ‘Mother.’ It is drawn in such a manner, that when the viewer looks at the painting; Bhagat Singh appears to give the book to the viewer. Explaining the painting, Gurpreet states that Bhagat Singh has been always shown and brandished as a terrorist. Contrary to this popular belief, Bhagat Singh was a well read revolutionary, and wanted to bring about a change in people’s thought process. He further adds “A person who was reading Lenin minutes before he was going to be executed and left a page folded for the next person to read, was an ideology in himself.” The idea behind choosing ‘Mother’ as the book is in itself unique. He tells “ Mother is a story of a young Russian revolutionary, named ‘Pavel.’ When he is executed his mother flings revolutionary literature into the air, just as Bhagat Singh did in the assembly proceedings. Due to this striking resemblance I chose ‘Mother’ as the book.”

Gurpreet has been time and again honored by various art societies and institutions. He has the honor of being awarded at ‘The World Sikh Conference’ in 1995 for his work on Sikh history, in 1997 at ‘Punjab Kala Bhavan, Chandigarh’ for best painting, by ‘Norah Richards Memorial Art and Theater Society’ in 1999. In 2015, he was bestowed with the prestigious ‘Punjab Lalit Kala Akademi Award’ for his painting- ‘Indomitable.’ The painting as he explains shows a bull that symbolizes an honest and strong common man. He cannot be dominated by the evil forces of society. Some barking and howling wild animals are shown at the back as a symbol of evil forces. An old wooden frame depicts the social structure.

Apart from these paintings, he is painting a series of paintings on Sikh history. Some of the notable paintings he has painted include Maharaja Ranjit Singh, Hari Singh Nalwa and Sham Singh Attariwala. Besides painting, Gurpreet is a keen photographer and likes to photograph portraits and nature. He is currently photographing notable Punjabi writers and poets, namely Surjit Patar, Ajmer Rode, Navtej Bharti, Laali Baba and many more. The reason he cites is the lack of knowledge among Punjabi youth about our famous writers. He was awarded the fourth prize by NDTV in the year 2010 for a national level photography contest. 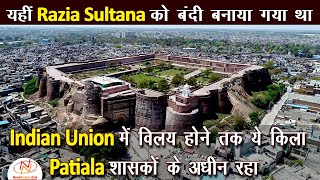