HOLLYWOOD- The last 24 hours have proved nerve wrecking for Marvel fans courtesy a profit sharing battle between Sony and Disney which resulted in Spider-Man franchise being ousted from Marvel Cinematic Universe (MCU).

For the uninitiated, here is a brief recap of the whole profit sharing battle-

Sony owns the right to Spider-Man but after a deal with MCU chief Kevin Feige, it was decided that the superhero will be included in MCU and the studio would get 5% of the profits.

Under this deal, Tom Holland aka Spider-Man made his debut in MCU in 2016’s Captain America: Civil War and went on to star Spider-Man: Homecoming, Avengers: Infinity War, Avengers: Endgame and recently released Spider-Man: far From Home.

As per reports, now only two films are left to be released under the original deal but Marvel asked for a new arrangement under which it would get 50-50 share in profits. Sony rejected this deal and Spider-Man was ousted from MCU.

While Disney, Marvel’s parent company, is yet to comment on the latest development, fans are tearing their hearts out on social media.

Dominic Holland, Tom Holland’s father, has also joined their cause and tweeted the hashtag, #SaveSpiderMan along with a link to his blog in which he hoped, “The show will continue. Too much at stake and too many dollars riding on it – and besides, everyone wants the same thing; namely, Spider-Man on large screens keeping people safe and entertained."

He also stated, "we are truly in trouble considering that it is superheroes that need saving."

Spider-Man will be different but equally awesome in future: Tom Holland

Tom Holland thanks fans for Spider-Man: Far From Home success 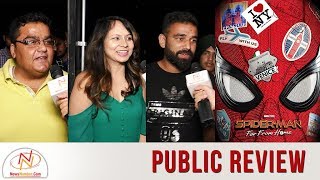 The world isn’t as simple as a straight white guy: Tom Holland

Tom Holland Opens up about first meeting with Stan Lee

Stars line up at Spider-Man Far From Home Premiere

I am living the most normal and regular life ever: Tom Holland